The Top 5 Places to Snorkel in Los Cabos, Mexico 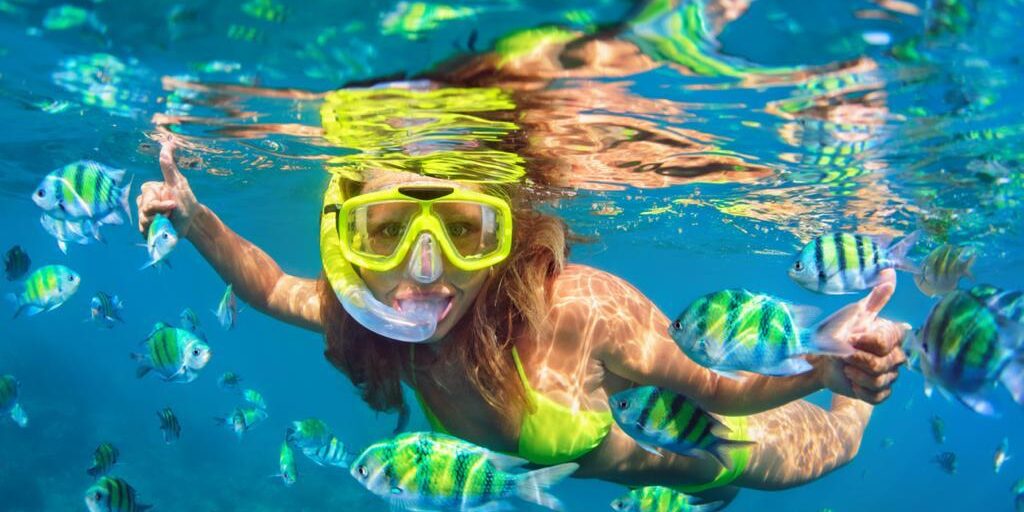 So, you’re wondering where to go snorkeling and planning water activities during your private luxury yacht charter? You’ve definitely come to the right place. We take our yacht guests to the top 5 places to snorkel in Los Cabos, Mexico.

Our local knowledge will help guide you to the most enticing locations in the party town to dive under but with the goggles on. The top 5 places to snorkel in Los Cabos, Mexico run the gamut from rock reefs to sandy beaches. Top snorkeling spots in Cabo have high visibility and a good mix of marine life.

Don’t expect all the locations to be within easy reach of Cabo San Lucas’ downtown. You might need to venture up the so-called Tourist Corridor to get to some, or even hop across to the East side of the Cabo-area in search of the aquatic life-filled Sea of Cortez. That said, there are one or two spots that are a quicker yacht ride from the marina, which means you could be snorkeling in no time at all after a VIP breakfast aboard a yacht.

The best time to go snorkeling in Los Cabos is probably around May or June through the early fall months of September and October. That’s when the SW swells turn off, calming the waters on the beaches of the coastline to the east of the town. It’s also when you get pleasantly warm waters in the low 80s F, so you can usually get by without a wetsuit or too much gear. However, due to the amazing climate year-round in Los Cabos and 350 days of sunshine, any time of the year offers spectacular snorkeling.

The shimmering yellow sands of Lover’s Beach join with the rugged stone stacks of Pelican Rock on the northern side of The Arch at Land’s End, the main peninsula that juts out to divide the Sea of Cortez from the vast Pacific Ocean just south of Cabo San Lucas proper. The result is two spots that are close enough to the rich ocean currents to entertain all manner of marine life but also tucked into the rocks to maintain decent visibility throughout much of the year.

The other thing that catapults both of these places to the top of our list of the best locations to go snorkeling in Los Cabos is just how accessible they are. It’s one of the quicker locations to get to aboard a yacht from the main marina. Be on the lookout for the infamous sea lions that hover around the main marina and along the coastline all the way to The Arch.

Since these are two of the easiest snorkeling spots to get to in Cabo San Lucas, you can plan this into a yacht charter agenda very easily. The latter will often include extra stops at Divorce Beach and even Land’s End. Either way, you can expect to see oodles of small fish species (including angelfish) surrounding the rock underneath the surface and large pelicans hanging out on the boulders by the beach itself.

Santa Maria Bay isn’t just a fantastic place to get snorkeling in Los Cabos, Mexico. It’s also one of the prettiest beaches on the whole south coast of the Baja. Get ready for a sweep shimmering white sand and waters of impossibly turquoise blues, all hemmed in by headlands of rust-tinged stone and a few uber-lux hotels.

The best snorkeling areas of Santa Maria Bay cluster around the south end of the area. There’s a big stone hill jutting straight out of the Sea of Cortez there. It’s enveloped by pockets of reef where everything from vivid yellow pork fish to delicate damselfish can be spotted hiding in the nooks and crannies.

One more bonus: Santa Maria Bay is regularly visited by pods of blue whales and fin whales that pass up and down the coast to the east of Los Cabos. They’re most common in the winter months between November and March and draw in the big crowds. 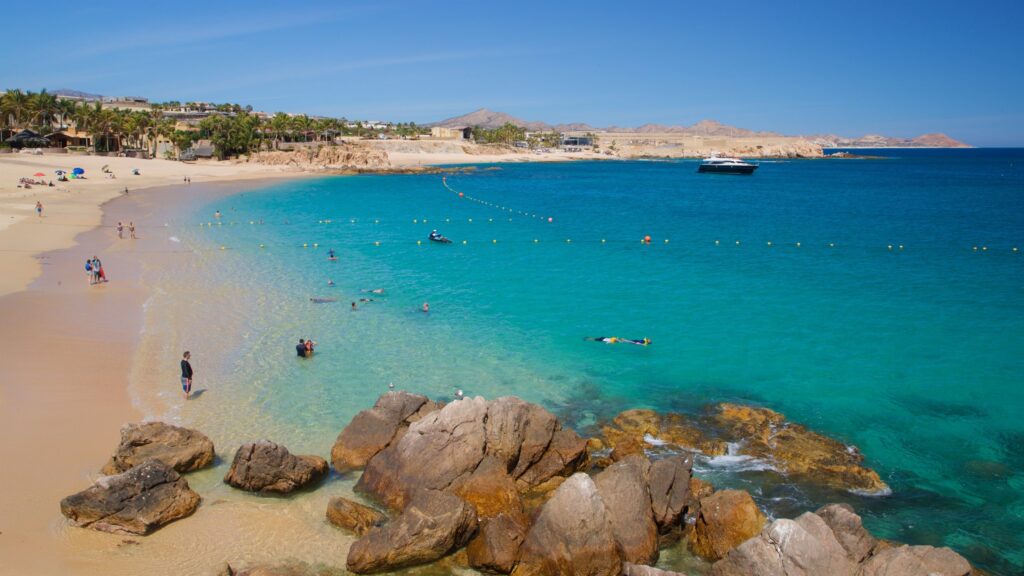 Playa Boca del Tule is actually known as one of the top surf spots in Cabo. It gets a good hit of southern swell throughout the summer months. Snorkeling here in the winter months offers incredible underwater visibility.

During the early fall to winter to early spring, you’ll get access to a series of little rock pools when the tide is high. They’re often filled with anemones, urchins, whitebait, and strange seaweed species, offering great viewing for children.

For something a little more adventurous, be sure to check out the string of coves on the south end of Playa Boca del Tule. They eventually open up into wider Chileno Bay but have good protection from the dominant swells, ergo better visibility.

The main public beach at Chileno Bay is unquestionably up there with the best snorkeling in Los Cabos. It’s boasts a prime location on the Tourist Corridor roughly midway between El Tule and Casa Fortuna. That puts it about 1.5 hours cruising aboard a yacht from the Cabo San Lucas Marina. Organizing a snorkeling trip to Chileno Bay is not complete without a fabulous VIP lunch while anchoring in the bay.

What sets Chileno Bay apart from the crowd is just how sheltered it is. It’s enclosed to the north and south by high and long fingers of rock. Meanwhile, the beach itself looks plum eastwards into the Sea of Cortez, which cuts down the southern summer swells and the western winter swells, helping to keep the currents still all year round.

You’ll definitely want to snorkel a bit deeper at the Chileno Reef. It’s a stretch of pristine coral gardens and rock reef that starts pretty close to the shore here, so not too much swimming is required. There is a myriad of fish to see including big-eyed groupers, ember parrotfish, rainbow wrasse native to the sea of Cortez, and a whole load more besides!

Of all the places to snorkel in Los Cabos, Mexico it’s the Cabo Pulmo National Park that often tops the bucket lists. We have to say, it’s extremely popular with Scuba divers and a snorkeling mecca. You’ll be looking at a whopping 17,500 acres of protected space here, shared between the coastal coves of the eastern Baja California Sur and the underwater reefs that spread into the Sea of Cortez around Boca del Salado and Villa los Frailes.

Since its establishment in 1995, the protected areas within have seen something like a 500% increase in native fish stock. If that sounds like it’s an awe-inspiring place to come to in search of the multicolored small fish and all manner of other sea life, then that’s because it is! Snorkelers at Cabo Pulmo regularly see sea turtles, mobula rays, dolphins, and an abundance of other aquatic life.

An organized diving or snorkeling trip aboard a yacht is definitely the best way to see this part of the Los Cabos region. Getting there and back takes some time. A yacht charter plus snorkeling (or diving) will probably last an entire day. 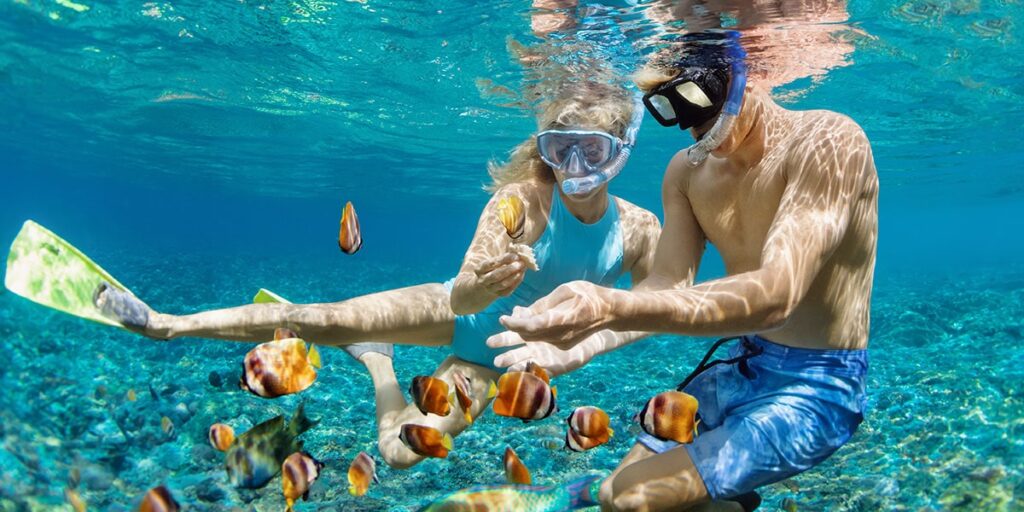 The Best Spots to Snorkel in Los Cabos, Mexico

There are numerous, top-quality locations for snorkeling in Los Cabos, Mexico. You can go for the easy-to-access coves of Lover’s Beach, which sits a mere 15 minutes on a yacht charter from the Cabo San Lucas Marina. Or you can venture far further out to the protected reefs of the Cabo Pulmo National Park. Here, you’ll encounter a vast expanse of marine habitats filled with corals and intriguing fish species. A must-experience is always Chileno Bay.

Wherever you choose, remember that the best months to snorkel in Cabo are typically spring to summer. Warm waters extending into the fall. When sea temperatures are at their highest, the visibility in the water is superb.

For more information about snorkeling aboard your private yacht, please contact us today.